Secret Surgery Society – The Cosmetic Surgery Holiday Specialists Harley Street standards without the price tag!!!! Pick up the phone and give us a call on 0843 289 4 982

The Only Way is Cosmetic Surgery

Followers of The Only Way is Essex will know just how glamorous one of its stars, Maria Fowler, already is. Fowler has already admitted to having undergone plastic surgery before – including breast implants and lip augmentation – but it sounds like she’s got her eye on more procedures in the future.

The 25-year-old reality show star Tweeted “Just had my Pre Operative meeting with @MYA_Tweet I am officially booked in for Lipo in 3 weeks. It’s going to look amazing. So excited x x’. It looks like, having already booked her liposuction slot, Maria Fowler is already set on a slimmer figure!

Maria hardly looks like she needs the liposuction, but of course, the procedure is often chosen by those who are slim and physically fit, but with just a little extra puppy fat in all the wrong places. No matter how much you work out, it can be difficult to lose the last few pounds from your bun, hips, or tummy, so we’re not surprised that the reality star is turning to surgery.

Apparently, Maria dislikes the way she looks in a bikini. We beg to differ – but it’s not for us to say. It’s great that she’s so proud of her decision, and we wish her the best of luck with recovery in three weeks’ time!

To take the next step and receive a FREE personalised info pack and quote please visit www.SecretSurgery.co.uk or call 0843 289 4 982 or email [email protected] 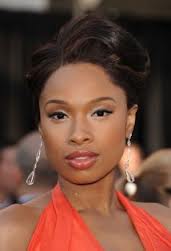 Jennifer Hudson – without a doubt one of the world’s greatest beauties – has recently told all about the secret of her luscious lips. The singer and actress has kept ‘schtum’ for a long time about whether or not she’s been under the knife, but she recently came out about her plastic surgery.

The 30-year-old told Oprah Winfrey on Oprah’s Next Chapter that she got her lips done when she was starring in a movie filmed just a few years ago. “When I did Dreamgirls I actually had to get my dent right here injected because it was affecting the lighting. And when I got it done the doctor was like ‘I do not want to do this – do you realize people come in here and pay to have the lips you have naturally?’ and I was like, ‘I don’t want to, but I have to, for the movie!’”

Obviously, we think Jen’s beautiful – no matter whether she’s had her lips done or not! Her lush lips look natural and gorgeous, and we’re proud that she’s so easy-going when it comes to talking about it. Lots of celebs decide to go under the knife, and if it’s what they want, then we’re happy for them!

To take the next step and receive a FREE personalised info pack and quote please visit www.SecretSurgery.co.uk or call 0843 289 4 982 or email [email protected]y.co.uk

Has Lady Gaga Had Some Work?

That is, another kind of work to the all-singing, all-dancing work she does on a regular basis. Rumours this week have been suggesting that Lady Gaga has undergone a lip augmentation procedure, in addition to the nose job that has been speculated for some time.

Speculators say that the singer’s lips looked swollen in a recent photo that had been Tweeted by Gaga herself. We don’t know for sure whether she has undergone any surgery at all, particularly considering that she has previously been outspoken about not having plastic surgery – but if she has taken the plunge, we at Secret Surgery think good on her.

It’s certainly not uncommon for stars to opt for lip-plumping treatments to give them plumper, fuller lips, and this kind of effect can be created with various different fillers and implants. Lip augmentations can be very minor surgical procedures, and given that they require very little recovery time, it’s no surprise that they’re so popular with working women like Gaga.

Angels Chouaib, MD and founder of Secret Surgery Ltd., has said that “Whether or not Lady Gaga has had cosmetic surgery, we think she looks great. If she hasn’t, then it’s good for her that she just naturally has those good looks. If she has – well done! Being brave enough to choose cosmetic surgery is something that should be applauded in everybody.”

To take the next step and receive a FREE personalised info pack and quote please visit www.SecretSurgery.co.uk or call 0843 289 4 982 or email [email protected]

For some people, one cosmetic surgery procedure can lead to another… 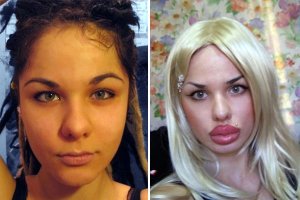 Guess which one was the before shot.

Enter Kristina Rei. The 22-year old Russian nail technician became a viral sensation recently as reports of her record-breaking multiple lip enhancements spread across the internet. Starting when she was 17, Kristina has had 100 silicone injections in a bid to resemble her cartoon heroine Jessica Rabbit.

Kristina claims that the augmentations have helped “boost her confidence”, and that she is far from being done – in future, she plans to undergo not only more injections, but adjustments to her breasts, nose and ears. “I think I look fantastic and it makes me happy,” she is quoted as saying. “Sometimes strangers shout names at me in the street – like big lips – but I don’t care. I want to go more extreme. I want to look like a cartoon character. I am addicted to it. I love it.” END_OF_DOCUMENT_TOKEN_TO_BE_REPLACED